Hydroponics in Antarctica is as unique as the continent itself. The extreme environmental conditions found here make the process of growing food a formidable challenge. Four months of solid daylight, four months of total darkness, and unpredictable winds and temperature changes present a unique growing situation. One cannot simply build a glasshouse, set up a system, and expect tasty produce to grow!

However, at McMurdo Station on Ross Island (and to a much lesser degree at the South Pole Station), successful harvests are achieved on a daily basis. The 649 square foot greenhouse at McMurdo can generate a monthly average 250 lbs of produce during peak cycles. Varieties include lettuce greens, spinach, arugula, chard, tomatoes, peppers, cucumbers, and herbs. The harvest is ample enough to provide a winter community of up to 230 people a salad once every 4 days, plus lots of fresh herbs, veggies, and fruit for the galley chefs to incorporate into their menus. During summer, however, community population can reach numbers of over 1000 people. During this time, the greenhouse simply acts as a supplement to the fresh food flown into the base from New Zealand. One of the greatest year-round benefits, however, is the fact that the greenhouse is the only source of lush, live plants, colorful flowers, and warm, humid air. Many community members frequent this environment for this reason alone! 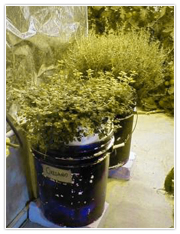 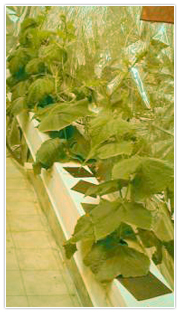 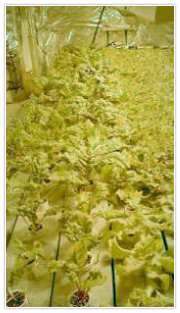 Where does Perlite fit into all of this ?

Where does Perlite fit into all of this ?

Perlite is one of the main types of media we use to grow our herbs and greens. Mixed in proportion with vermiculite, then placed in PVC plugs, it is then transferred into reservoir systems. Seeds are sown directly into the media, and live out their lives in the same plug (see pictures).
We also used the mixed media for independent bucket systems. These buckets are the simplest form of hydroponics and usually hold herbs and flowers

One of the most important parts of our greenhouse is its ability to receive needed supplies such as Perlite before the base closes for winter. Each February, most of the supplies, food, and materials for McMurdo Station and the South Pole Station arrive via cargo vessel. This includes, among other things, media, lights, seeds, and all the system needs that the greenhouse requires for the following year. The transfer off the vessel can take up to four days. The next few days are then devoted to loading the ship with all of the waste accumulated during the year. This rubbish, including construction debris, recyclables, food and plant waste, and human liquid waste, is then delivered back to our remediation company in the U.S. where it is processed.

Once the greenhouse receives its supplies, and the station closes for winter, there is no possibility of getting forgotten supplies. Whatever is on base is what you get! So, accuracy is important!

With the proper supplies, the McMurdo greenhouse functions like any other greenhouse. The main difference is that our greenhouse is completely sealed in and insulated, while most greenhouses in the states are made of glass. There are electric heaters and a furnace to heat the rooms at night, and daytime temperatures are maintained through the combination of heat from the HPS and MH lamps and various intake, outtake, and circulating fans. All of the systems are of the recyclable kind, with each type of plant growing in its own system.

For example, there is a tomato system, a pepper system, three herb systems, two stacked green/lettuce systems, and three cucumber systems (see pictures to the right). Each system contains its own reservoir, pump, aerator, water heater, and PVC troughs and tubing. We utilize a three-part liquid nutrient and pH adjusters, which are administered by hand after a daily meter reading. One full-time greenhouse technician takes care of everything!

If you want to read more about Mc Murdo hydroponics, go to: www.antarctichydroponics.com