So-called “Green Roofs” are being built more and more throughout the world, especially in Germany. They are used on both commercial/industrial buildings and residential homes.
According to Dr. Edgar David, an Associate Professor of Landscape Architecture at Temple University/Ambler, “green roofs mimic the natural processes that the buildings replace. It is a new and exciting technology that has the ability to improve our air quality and water quality.”

A office/school complex with a green roof

In some German cities, green roofs are being encouraged by tax incentives and regulation. And in some cities, like Stuttgart, the use of green roofs is practically mandated in some construction.

According to Fritz Hammerle of Arti-Grün (located near Stuttgart), green roofs have developed for a number of reasons:

• Water Retention and Stormwater Issues
With many non-impervious surfaces or developed areas with 5% or less of impervious area, 90% of the water from a storm will run off within 9 minutes. With green roofs, only 30% of the water will run off within 2 hours. As a result of increased development in many areas along the Rhine River, for instance, Köln has had three 100-year floods within ten years!

• Visual and Environmental Improvements
Roof gardens and green roofs have proven to be visually appealing and desirable – especially in urban areas where there is less and less open space available or visible. With green roofs (in Germany pesticides and insecticides cannot be used on green roofs, and fertilizer is used sparingly,) the amount of pollution from stormwater run-off has been significantly reduced.

• Energy Savings
Green roofs have proven to save heating costs in the winter and cooling costs in the summer. They also reduce the amount of stormwater that has to be processed in stormwater systems and municipal waste water operations.

As a result of these and many other concerns, Germany has seen a significant growth in green roofs. In 1994 only 11% of all flat roofs (roofs with a slope of 5% or less) were being built as “green roofs” – in 2001 the number has increased to 14%!

To read more about green roofs, which use lightweight mixes using perlite for water retention, proper drainage, and light weighting – there are a number of interesting sites.

For more information about the use of perlite in green roofs, here are some links: 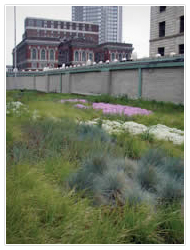 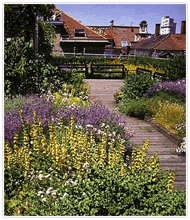